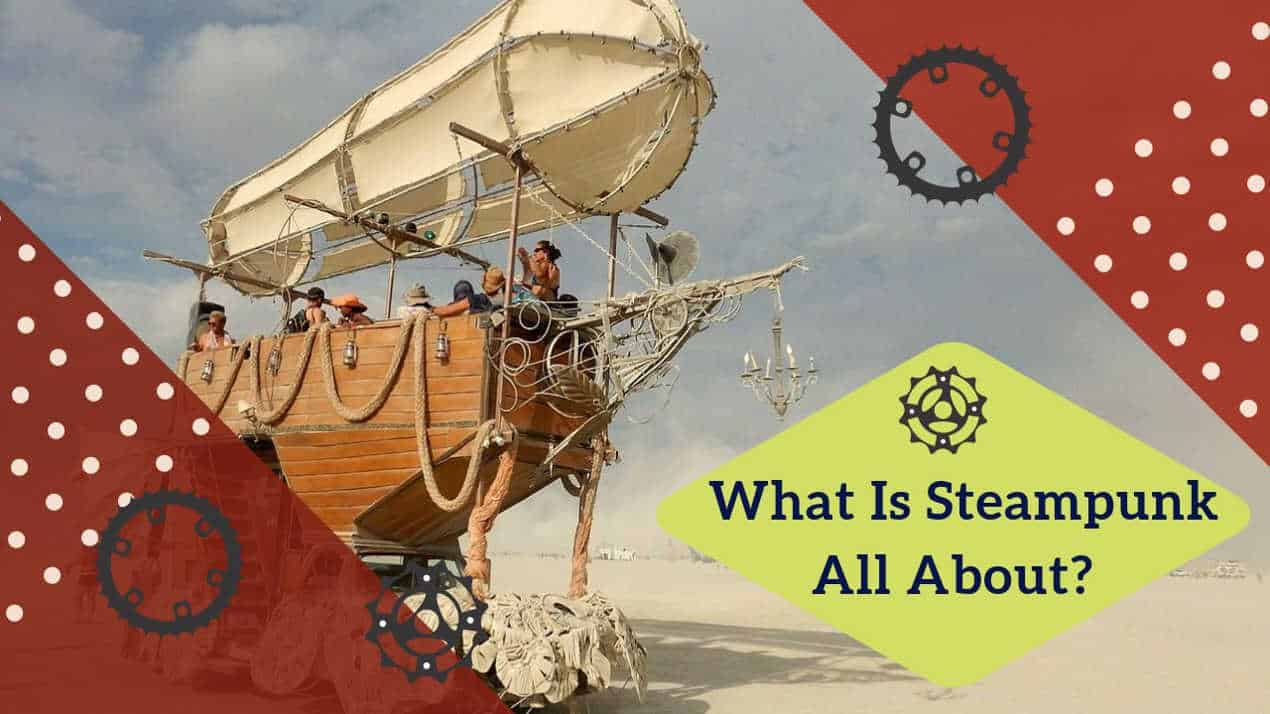 After starting my site Gear Gadgets and Gizmos I stumbled upon the connection to Steampunk. So I went out to find out, What is Steampunk All About? This is what I found out and decided to share it with you. Steampunk has been around for a long time but only recently has a name.

If you have never heard of Steampunk this post should give you a good idea of what it is all about. If you already are into Steampunk and have anything to add. Make a comment below and share your insight.

During the industrial revolution, steam was the technology expected to take a man to the moon and beyond. This technology was eventually replaced by petroleum but the inventiveness and innovation of steam power in this era is the basis of Steampunk.

Surrealist ideas resonate with Steampunk. What matters is doing. Glorify the tinkerer for tinkering and not just for producing. Steampunks proudly show their seams and rivets because the way they build it matters, somewhat more than the actual function itself. Creating an elaborate machine to perform a simple function.

The term “Steampunk” was first used to refer to a branch of “cyberpunks” fiction set in Victorian-era technology.  Steampunk is a subculture that pays respect to the antiquated technologies.

A popular quote to describe Steampunk

Why do they call it steampunk?

Steampunk is not about electricity “Steam” is the order of the day as in steam engines are fashion into marvelous things even flying machines. “Punk” is the counterculture rebel nature of this genre.

Where does the genre come from?

The author K.W Jetter first coined the term “Steampunk” in April 1987. It was a pun referring back to his earlier sci-fi book “Cyberpunk”. A book about a future world in an apocalyptic setting that focuses on society as “High-tech low life” Featuring old new technology that has been made into something the original inventor had not anticipated.

Steam has become the main form of energy as electricity and petroleum are not available. This resourcefulness is a must due to the general bleak circumstances this genre is set in.

What is Steampunk All About?

A Cyberpunk as with all good characters is an outsider that normally lives on the edge of society. Surviving in a rapid technological changing society that includes the atmosphere of computerized information, personal monitoring and invasive modifications of the human body. Kind of sounds familiar to where we are heading today.

Now K.W Jetter coined the term “Steampunk” but he was not the inventor of this sci-fi genre. It is a 19th-century sci-fi style that first appeared in Scientific Romances novels written by H.G Wells, Jules Verne, and Mary Shelley. These authors wrote about futuristic settings with visions of how society will evolve often incorporating the use of steam in many future inventions and machines they envisioned.

The genre gained popularity in the 1960s and 1970s and a number of books were published but the actual term Steampunk originated in the late eighties. If you really think about it Dr. Suess was a little bit Steampunk with his elaborate buildings and machines. Celebrating the quirky design more than the overall function.

In my research online I found some say the origin phrase “Steampunk” came from Pat Mills British Anthology Comic 2000 AD “ Nemesis the Warlock” a comic book series that began in 1980 with stories set in 2000 AD.

Some say Steampunk is just a genre of fiction. But others say it’s a way of life. About 15 years ago Steampunked jump of the pages and into our lives. People started dressing up in this style and a number of Cosplay festivals and fairs started cropping up.

What is The Genre Today?

You probably recognize it when you see it. You probably have seen it in movies or read it in books. The theme is heavily based on old industrial photos style with rivets, metal, and steam. Movies that are influenced by Steampunk are the recent Sherlock Holmes Reboot movie, The League of Extraordinary Gentleman and the Wild Wild West with Will Smith is a great example of this genre.

The growing trend of Steampunk today is a collection of two group’s designers and “DIYers” that push the boundaries of creativity and function.  There are no particular rules and the only requirement is to have an imagination. Steampunk attracts highly artistic people because of its very creative nature and free spirit.

It is quite a popular look at the annual Burning Man festival, held in the Black Rock Desert. They create a surreal city for a weeklong celebration of inner reflection, art, music, and individuality. The aviator goggles are a particularly favored look not only for the cool look but also for very practical purposes, to keep the desert sand out of your eyes.

The Steampunk look fits well with the burning man as it fits with the surreal world of outsides that celebrate the creators and not the creation. Breaking from the norm.

There are a number of festivals/fairs and groups around the world.  Many of these people are drawn to Steampunk by the look and aesthetics of the time. Items from this time seem to have more character textures and imagination than many of the clean iWorld products we use today.

The community despite the rebel nature of the genre brings out warm friendly people that enjoy a good time and sharing their gear gadgets and gizmos. Most are self-made from a mixture of fittings and gears that are repurposed into something new.

At these gatherings, people dress up in their favorite attire adorned with many accessories. Some are bought and many are homemade.

For men, top hats and aviator or welder goggles are a must. Topcoats and vests accessorized with clocks and gears add to the look. If you are really serious wearing a mechanical arm gives it that unmistakable Steampunk look.  Brass fittings and gauges are all part of the look. Industrial art in many ways. See my complete post on How to look like a Steampunk Man

For women, the style is the 19th Century but women wear this style with leather corsets and other accessories like clocks and gears.  Some wear dresses but many wear tight pants.  Not available and a little sexier than the original time period.

An example of a modern-day influence is Lara Croft. Corset cleavage aviator/welder goggles and leather. Feminine badass. Although in the recent Tom Raider movie Laura seems to be wearing only her trademark red round sunglasses.  Some women will wear top hats but wearing aviator glasses are still a must for women Steampunk accessory.

Steampunk likes to be based on historical accuracy by wearing clothing from the time period. Women have updated the look with corsets and leather and made the look much sexier then during the real-time period.

Steampunk is a revolutionary movement that aims to break people out of the status quo. Open peoples minds to the real possibilities of living. Replace drudgery with marvel. See my complete post on How to look like a Steampunk Woman

Why is Steampunk growing in popularity? Some say it is our societies disillusioned with today’s modern society. For example, the smartphone that everyone has. They all look and sound the same. Since everyone has one there is nothing unique about your phone. Many things are mass-produced and become overly popular and everyone looks the same.

Back in the Victorian era, the technology was very unique everything was different. Craftsmanship was very important. There were no assembly lines and many everyday things were adorned with intricate patterns and textures. Everything was very customizable and could be changed or adapted to a specific purpose.

It’s a way of giving your personal technology a goth makeover. Like taking a modern-day computer and make it look like an old typewriter, or using an old brass and wood telephone receiver to your answer your iPhone. The main takeaway from the movement is a protest against the advancement of technology and a return to more analog technology.

The movement also brings out the inner MacGyver in us all and makes us believe we can create anything if we put our minds to it. For a great resource for unique items checkout Etsy.

Not only can you dress in steampunk style, but you can also bring into your home decor. There is now furniture, clocks, lamps and a number of other home accessories that are inspired by the Steampunk look. Here is a good example of a Clock from Etsy that can bring steampunk into your home. See my post. Steampunk Interior Design Style and Decorating Ideas

What are Nixie Tube Clocks and how do they work?